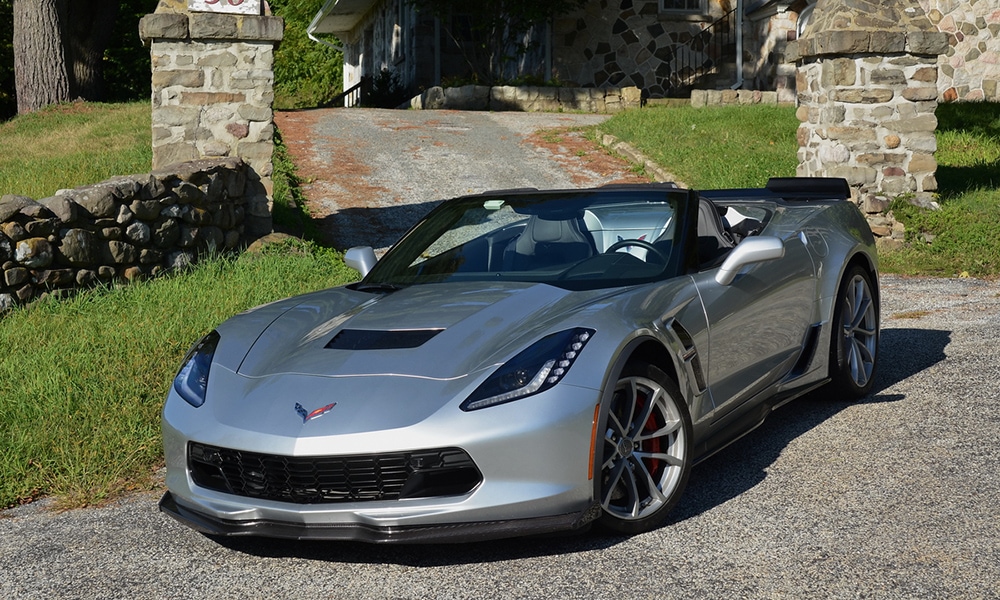 When you’re a middle-aged man out driving around in a Corvette, it’s inevitable that some people may think you’re compensating for something or trying to capture the spirit of your lost youth.

That may be true to some degree, but that tired old cliché really needs to be laid to rest.

Fact is, the Corvette has evolved into a terrific sports car that rivals the storied brands from Europe when it comes to performance and it should be famous for that rather than as a sports car driven only by men who are past their prime and not ready to admit it.

Corvettes are available in a few different flavors and they’re all good.

From the base Stingray to the hardcore Z06, Corvette models run the price spectrum from just over $55,000 to more than $84,000. They’re all performance bargains but the Grand Sport may be the best all-around car of the bunch.

It combines a 6.2-liter naturally aspirated motor that puts out 460hp and 465 lb-ft of torque with the more aggressive aerodynamic components from the Z06 as well as an upgraded suspension, slotted brake rotors and a track-ready electronic limited slip differential and dry sump oil system.

In comparison, one of its closest rivals, the Porsche 911 Carrera S, is significantly more expensive, with prices starting at $105,100 for the coupe or $117,400 for the convertible.

I usually prefer coupes over convertibles, but when Corvette offered up the Grand Sport convertible to test, I didn’t hold out for a coupe. There’s really not much to separate the two since the weight difference is only 59 lbs. (3,487 lbs. for the convertible vs. 3,428 for the coupe) and both can get to 60mph in well under 4 seconds – you’ll just get more wind in your hair with the convertible.

Our Grand Sport Convertible test car was also fitted with the 3LT package ($9,745) that adds alcantara and additional leather trim to the cockpit and an onboard performance data recorder. Our test car also had optional ceramic brake rotors ($7,495), a carbon fiber ground effects package ($3,995) and an 8-speed automatic transmission ($1,725). A 7-speed manual transmission is standard.

You can spend a lot on a Corvette if you option it out, but the base model car has more than enough performance to satisfy the most hardcore driving enthusiasts.

The design of the Corvette has evolved over the years, but there’s no mistaking the current generation C7 model for anything but a Corvette.

The aggressive styling may not appeal to everyone, but this car is certainly a head-turner. It looks powerful and fast, and the wide-body kit from the Z06 looks fantastic.

I think the car looks best from the side and the front, as the rear end has too much black fiberglass and the taillights look a little awkward.

The biggest design weakness with the Z06 package is the rear wing, which is functional but looks like something a teenager made in shop class or their garage and it also tends to collect pebbles and dirt where it attaches to the body off the trunk lid.

A carbon fiber wing would look much better. Speaking of carbon fiber, the front splitter that’s part of the optional carbon fiber package looks great, but you can hit your feet on the side skirt when you exit the car if you’re not careful.

Inside, the Corvette cockpit is snug but well designed and laid out with the driver in mind.

There’s a mix of analog and electronic gauges and loads of information for the driver, including everything from engine hours and lifetime revs to the usual things like average fuel economy and fuel range.

The instant fuel economy display will also tell you if the engine is running on eight or four cylinders, as it cuts off four of them to save fuel economy in certain driving situations.

The seats are firm and supportive and overall the cockpit feels well put together, but there are still areas where the plastics and switchgear feel on the cheap side, particularly on the center console around the cupholders and storage. Lowering the roof is quick and easy, and it can be lowered at speeds of up to 30mph.

Just as there’s no mistaking the Grand Sport Convertible for anything other than a Corvette, the driving experience is also unique to Corvette, with the long hood out in front and the rumbling V8 under the hood.

There’s loads of power and grip, which allows you to carry a lot of speed through corners, and there magnetic ride control suspension is well damped and gives a surprisingly smooth ride for a car like this.

Sport mode offers a nice setup for a smooth road when you want a little less body roll, but it also makes the steering feel more artificial, and Track mode is too twitchy for public roads.

The carbon ceramic brakes provide impressive stopping power, but I assume the standard brakes would work just as well for normal driving.

If there’s any weak point when it comes to performance, it’s the automatic transmission, which performs well enough most of the time but is not as responsive as the dual-clutch automatics that competitors offer.

All in all, the Corvette Grand Sport Convertible is a very impressive sports car.

At 51 years old, I fall right into the usual target market for this car, but for most of my life I’ve not been a Corvette fan, preferring European sports cars instead, though I’ve always respected and appreciated the Corvette Racing program and always thought the 1963 split-window coupe is one of the best-looking sportscars ever made.

I’ve really only become a fan of Corvette road cars over the last five years and I’m pretty certain that respect for this car is not because my middle-age genes are kicking in, but simply because it’s just a damn good sports car.